It  makes sense that my books’ protagonists are older women.  I‘m interested in older women because I am one.  I also read about women who have survived the traumas of being young and are now facing the uncertainties of age.  So, I expected the three books I chose last month at Powell’s to have been written by writers like me. Old ladies. Not true. And all three books have found permanent spots in my bookcase. I’ll read them again and again for pleasure and for contemplation.
Dancing Fish and Ammonites, a memoir by Penelope Lively, describes being eighty so truthfully that I had to refrain from reading the first few chapters aloud to my sleeping husband. “You get used to it.  And that surprises me.  You get used to diminishment, to a body that is stalled, an impediment?  Well, yes, you do…” Reading it, I felt I’d found a sister, one who writes about being old a lot better than I do. Not an old lady, a vital one. 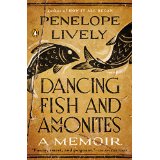 Our Souls at Night, by Kent Haruf, tells of a brave seventy-year-old woman who visits her widower neighbor and asks him to sleep with her. He does.  It is a wonderful story of love, family, and the realities of being alone, aging. Haruf wrote this in his seventies, his last book, published posthumously. 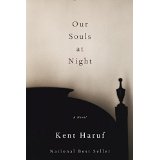 Rabih Alameddine tells the story of An Unnecessary Woman,  who lives alone, unfriended, in an apartment in Beirut as war circles around her workroom where she translates classic translations into Arabic and then places her manuscripts in boxes in a back room to be read by no one. I had to look up Alameddine’s bio to confirm that this gorgeously written, sensitive description of an isolated old woman, was written by a man. 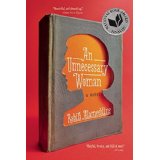 When I tried to place book covers on this post, my computer started writing in Greek. Really. I  believe this was punishment for stealing images from Amazon.  I’m trying again. As one of my books states, “It’s never too late to. . .”  whatever, even  become a thief.  And I’m thinking that it’s time to get back to the rewrite of the untitled manuscript in front of me––right after I attempt this little diversive crime . And finish Elizabeth Strout’s new novel lying open on my chair.

Get Updates by Email